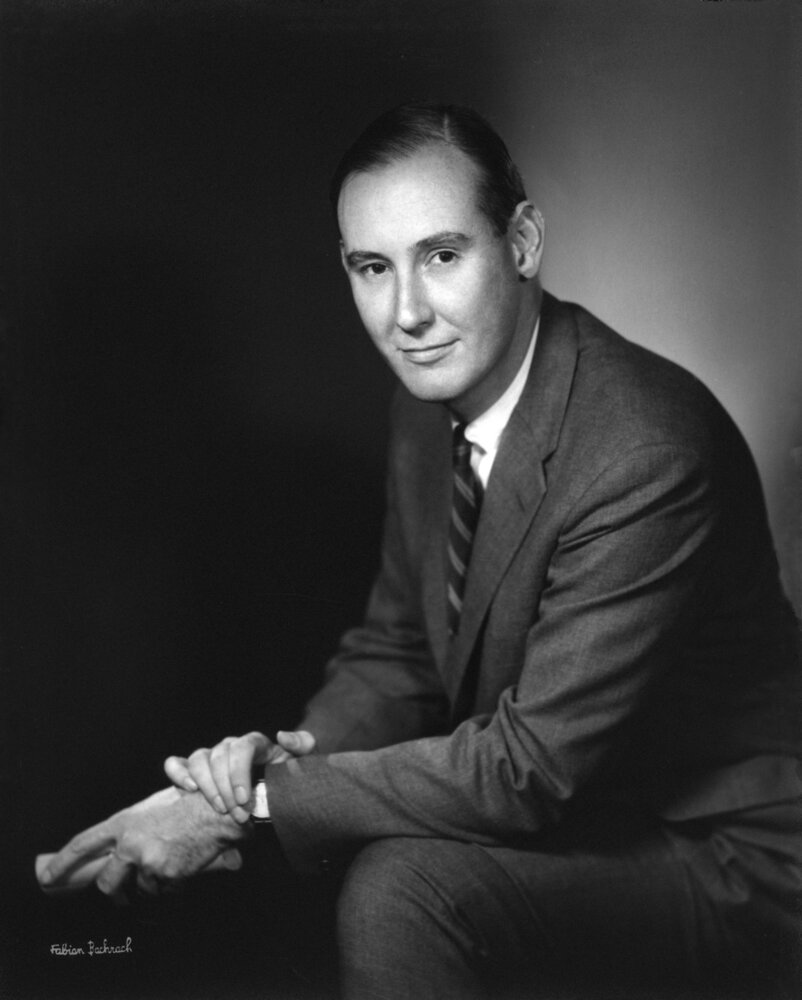 Thomas Edward White of Larchmont New York passed away peacefully on August 1, 2022, surrounded by his loving family. He joins his beloved wife, Joan. He is survived by his five children: Charles, Nancy, Linda, Penelope and Elizabeth, and nine grandchildren.

Thomas White was born on Staten Island on July 11, 1933, to Thomas Aubrey and Gladys White.  He lived in New York City and its suburbs for his entire life.  He graduated from the Trinity School in New York City and went on to Princeton University, graduating in 1955.  After finishing R.O.T.C. at Princeton, he served in the U.S. Army from 1955 to 1957. He graduated from Columbia Law School in 1960 and started his legal career at Stewart & Kissel in New York. He became corporate counsel for Howmet Corp. and its spin-off Howmedica, Inc. which in turn was purchased by Pfizer.

At Pfizer, Tom pursued a career in international business for fourteen years before retiring. Upon retiring, in 1983, he opened a boutique transactional law practice in Manhattan.  Combining his legal training with acquired business acumen, he practiced law and created and managed sundry businesses.

Tom White was truly a Renaissance man.  Always intellectually restless, he enrolled at SUNY Purchase in White Plains in the mid-1990’s, where he earned a B.A. in Art History Summa Cum Laude.  He later studied for his Master of Art History at the New York City School of Fine Arts although other calls to service in other realms caused him to end his formal post-graduate studies.  As a student, Tom brought a mature perspective to his class of twenty somethings and not surprisingly, aced his courses.  After completing his degree at SUNY Purchase, Tom continued to serve the college on its Board of Trustees.

Tom was a dedicated and valuable steward of his community and his faith.  During his 30’s, he was involved in local politics in Mamaroneck, New York.  A Republican, he served on the Mamaroneck Town Council from 1972-1975. During that time, he was best known for his extraordinary contribution to the construction of the domed Hommocks Ice Rink and Pool.  Wags at the time called it “White’s Folly”, but it has provided much needed recreation for the community in addition to providing a place for Mamaroneck High School varsity teams to train.

Tom served as an active Greenwich Hospital volunteer from 2006-2020, volunteering right up to the pandemic.  He spent most of his volunteer hours rounding with the coffee cart to nursing staff on the units and transporting patients throughout the hospital to their tests and procedures.  He was an active member of the Greenwich Hospital Auxiliary where he served as Auxiliary Treasurer and as Auxiliary President from 2013-2015.  Tom was the recipient of the “Presidential Call to Service-Lifetime Achievement Award” for serving over 4,000 volunteer hours within the organization.

Tom’s stewardship extended to service in support of his chosen house of worship.  He was active at the Larchmont Avenue Church for many years including service on the Session as an Elder.  He moved to St. John’s Episcopal Church in Larchmont where he worshiped for almost forty years.  He served as a Member of the Vestry for the church.  He volunteered as Member of the Episcopalian Diocesan Council where he served for nine years.  During that time, he was the Chair of the Congregational Support Plan Committee.  The Congregational Support Plan of the Diocese of New York assisted 60 under-funded churches during his tenure. Tom helped manage a budget of approximately $3.5 million.  Most of those parishes were located in poor and minority communities.  Tom was proud to lend his business skills to such a worthy cause.

For his efforts, the Episcopal Church awarded Tom the Bishop’s Cross in 2005.  The award of the Bishop’s Cross represented the Church’s recognition of a “life lived in the spirit of the Lord”.   Tom was awarded the Bishop’s Cross “in gratitude to a life of service to family, nation, and the Church.”  Citing his tenure as Town Councilman, his service in the military and his contribution to the legal profession, as well as the work undertaken in aid of the Diocese of New York, Tom was proclaimed as a man who “excels in the work of the Lord and is steadfast and immovable in his commitment to those he loves.”

Tom will be sorely missed by his family.  The love and concern for their welfare he manifested throughout his life will be irreplaceable.  He was always available to guide his children and their children as they navigated the challenges of life.  He was a mentor, advisor and counselor who would, as recognized in the Bishop’s Cross acclamation, “bring integrity, faithfulness, and steadfastness” to every aspect of his life.  He loved every member of his family and was always there with a helping hand.

No story of Tom White would be complete without mention of the love of his life, Joan.  Although Joan passed away in 1991, every member of the family remembers her dedication to Tom, her children, and her grandchildren.  The memory of her good works and caring soul lives on vividly in the hearts of Tom, her family as well as anyone who had had the pleasure of knowing her.  Her loss at the relatively young age of 56 years old left a void in Tom’s heart and life.  One small comfort he can take from his unfortunate passing is that he will at long last be reunited with her in Heaven.

A celebration of his life will be held at St. John’s Episcopal Church, Larchmont on Saturday, September 3 at 11 am.