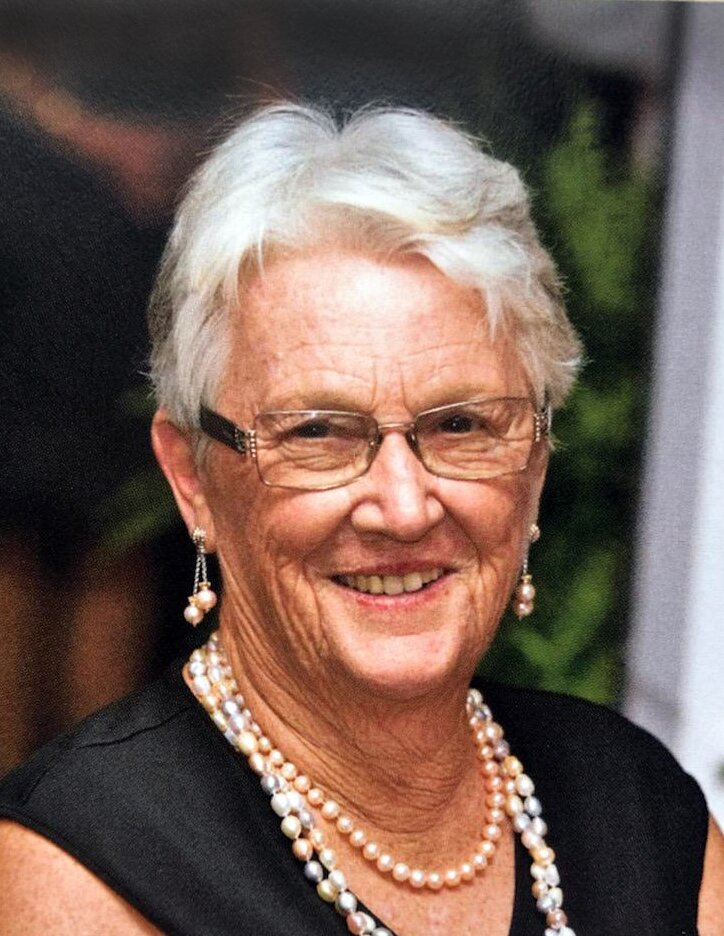 Nicole Rouzaud Mellet Menettrier of Larchmont passed away peacefully on April 15th, 2022 at her home, surrounded by her family.  She was born in Beziers, France on January 1st, 1926 to Marie-Antoinette and Emile Rouzaud. She attended parochial schools in Béziers and enjoyed vacationing in Biarritz prior to WWII.  Like many young people of her age during the war, she helped her family through the privations of food and worked towards the end of the war as a Red Cross nurse.  In 1947, she met Gilles Mellet, a French naval officer who was a close friend of her cousin.  After a brief courtship, they were married on May 18, 1948.  Nicole and the family followed Gilles’ naval career to many posts in Paris, Morocco, Brest, Toulon, and to his final career posting in 1955 in Washington, DC where Gilles served as a naval attaché at the French Embassy.   The family grew during these travels with the births of their children Nathalie, France, Lionel, Olivier, Fanny, Yann, Sophie and Laurence.

Nicole’s life had many challenges which she resiliently met with the practical and unassuming approach that she learned as a child of the Depression and a WWII adolescent.  She came to the US without any English language skills and 5 children, but that hardly mattered.  She navigated the DC social scene with openness and aplomb forging many friendships that added to her collection of numerous lifelong friends.  Over the years, Nicole sold real estate in Montreal and later, in Larchmont, working for Burbank and Houlihan-Lawrence. She held the family together after Gilles’ untimely death in 1976.  Through the New York French community social network where she was very active, she sold many French expats on the benefits of raising young families in Larchmont and helped lay the groundwork for the French American School of NY.

In 1977, she was invited to a party in Washington DC. Nicole was 51 years old, beautiful and as engaging as ever.  She was introduced to Pierre Menettrier by another cousin. Pierre was a lifelong bachelor and a French admiral, who was on assignment at the Pentagon. In fact, they had met long before as he was under Gilles’ command in 1948 and Pierre had been part of the honor guard at Nicole and Gilles’ wedding.  Nicole and Pierre hit it off and she began to make frequent weekend trips to DC. They were soon enjoying shopping trips to Paris, vacations in Martinique, sailing and camping adventures in the US. They were married in 1980.  Pierre retired from the French navy to settle in Larchmont with his large new family.   By then, all of Nicole’s children were young adults and Nicole and Pierre ushered in the next generation which grew to 29 grandchildren.. Pierre was open and generous with the family, adopting us as his own. He and Nicole fell in love with Key West, buying a yet-to-be-built time-share in 1983, which at the time seemed like a sure-fire scam.  Nicole had an eye for real estate and Key West was no exception.  She later bought a condo on Atlantic Boulevard which the family continues to enjoy to this day.  Pierre and Nicole’s time together was a wonderful span of adventure, self-discovery and of new and rekindled friendships. Sadly, it was cut short by Pierre’s death in 1985.

Nicole lived out the next 37 years of her life connecting on a daily basis with her family and many friends, travelling to far flung destinations with them.  She continued to be a voracious reader in French and English and, until just a couple of weeks ago, playing weekly bridge both in French and English. She suffered two more grieving blows when her granddaughter, Olivia Tucker, died of a sudden cardiac death at the age of 27; and a couple of years later, her son Yann died prematurely at the age of 51. Nicole and Yann were very close; she became Yann’s confidante and business partner.  Both Olivia and Yann left an indelible mark on the rest of her life.   Yet she soldiered on, seeing her grandchildren grow into adults, and subsequently seeing her great-grandchildren come into the world.  To date we count 40 great-grandchildren.

Continuing to lead the family as a matriarch, Nicole kept us together. We all felt her genuine, generous, and undemanding love and friendship.  She was one-of-a-kind.

God bless her soul. True to self, she will be buried alongside both her husbands.

In lieu of flowers, you might consider making a contribution to either Support.woundedwarriorproject.org  - or -

Share Your Memory of
Nicole
Upload Your Memory View All Memories
Be the first to upload a memory!
Share A Memory