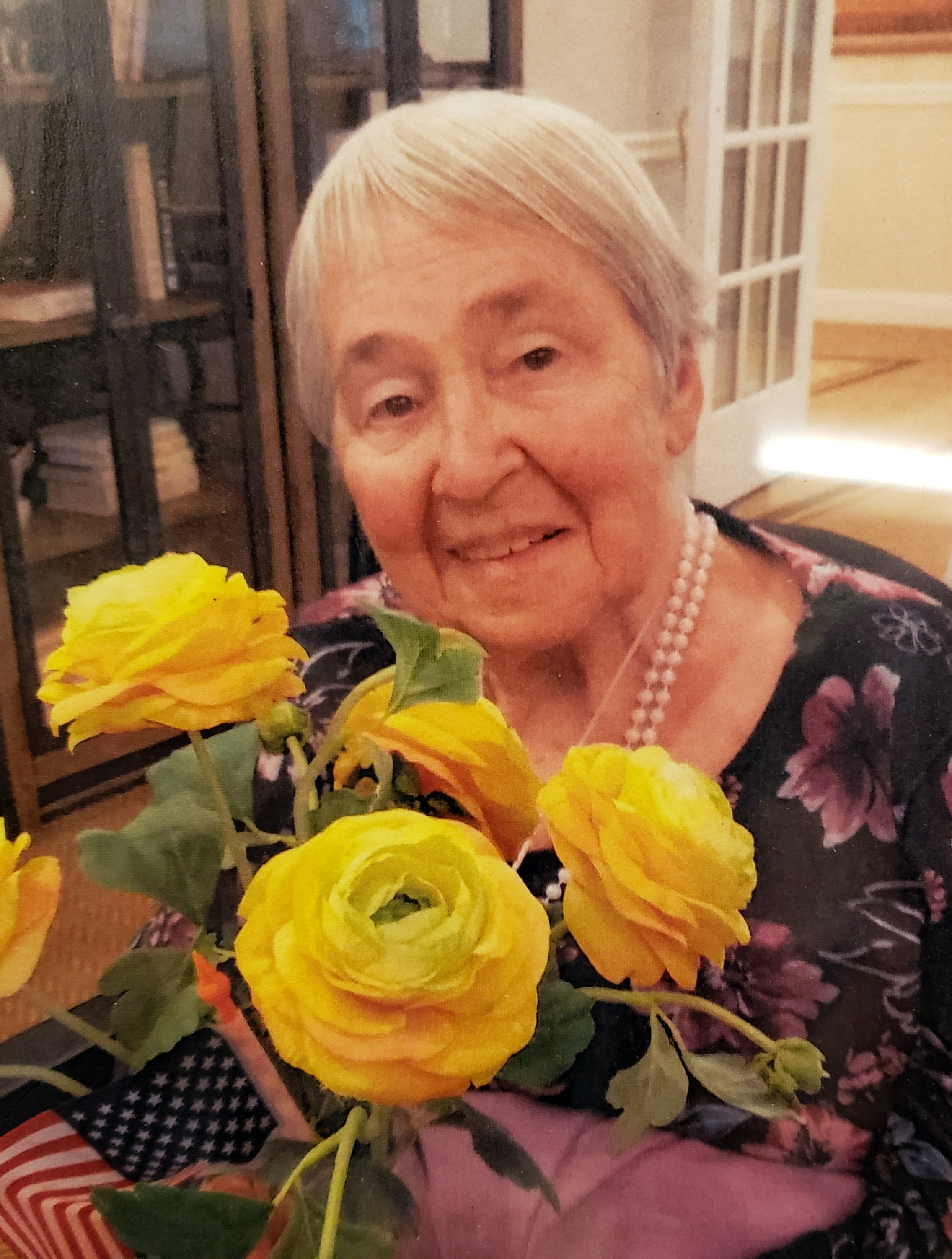 Gisele later moved to Montreal, Canada, where she happily lived and worked, until she met Ralph F. Santoliquido (deceased July 15, 2015). Gisele then moved to the United States and married her husband, Ralph, August 1953. Gisele and Ralph had two children, Frank Peter born August, 1954 and Dolores Rose in 1955. Gisele was a loving mother and hardworking individual who held many jobs throughout her life, but the ones she remembered fondly were as a counter person at DonutMaster, and an office worker at General Adjustment Bureau and Colonial Life Insurance Company. Gisele was the ultimate people person who met and made many lifelong friends at these workplaces.

While at GAB, Gisele met her dearest friend, Louise Coleman, a tremendous support person for Gisele, who introduced her to the art of growing roses and showing roses in competition. Gisele enjoyed being amidst “rose” people and these flowers immensely. She was also a longstanding member of TOPS, acronym for “Take Off Pounds Sensibly”. This organization not only helped Gisele lose weight but was an avenue for travel. Her most memorable trip was to Hawaii when she was awarded for losing and maintaining her goal weight. She was most proud of that accomplishment! She maintained that goal weight up until moving into assisted living!

Ralph and Gisele owned a house in upstate New York at Copake Lake. That house was Gisele’s sanctuary. She loved spending time there and adored being able to be with another dear friend, Marge LeSawyer (deceased). Gisele and Marge would scour antique shops, thrift stores, and yard sales finding all types of treasure, large and small. It was Gisele’s unfulfilled dream to own a small gift and curio shop.

After retirement, Gisele assisted her son with his business, R & F Trophies, helping with office work and building trophies. This was an incredible bonding time spent between mother and son.

Gisele’s daughter, Dolores, met and married, Keith Confalone. They have one daughter, Jada Lynne, who in turn has two small sons, Parker and Henry. Gisele’s granddaughter and her two great-grandsons were unequivocally, the light of Gisele’s senior years. She lived to hear stories of their antics, was thrilled to spend time with them, and marveled at every photo shown to her.

During Gisele’s married life she lived mainly in Eastchester, New York, but subsequently lived in Mamaroneck, Larchmont, and 10 1/2 years ago moved to Brookfield, CT, to be near Dolores and her family. Gisele and Ralph were parishoners at St. Joseph Catholic Church where many more friendships were formed. When it became clear Gisele could no longer live at home due to medical and care needs, she moved to assisted living. Her first home away from home was The Village at Brookfield Commons where she met her best buddy, Joanie Allan. Gisele was an active member of the community so much so that she won awards for attending the most activities throughout the year. When a different setting became necessary, she moved to Maplewood at Danbury where she spent the last 6 ½ months of her life. She was concerned she would not fit in and was told, “No worries, you can make friends with a rock!”. Indeed, she made new friends and was known for her pleasant nature and ever smiling face. She participated in every activity possible! Even in the hardest times these past few months, she was hardly ever contrary. She will forever be dearly missed by her family and friends. Gisele is survived by her daughter, Dolores R. Santoliquido, her son-in-law, Keith W. Confalone, her granddaughter, Jada Lynne Confalone-Sparaco, her great-grandsons, Parker and Henry, her dear 97 year old sister, Rose-Aimee Mask, countless beloved Canadian family members, and her brother in law, Anthony Santoliquido, sister-in-law, Lucille Santoliquido, their sons, Anthony (Margorie Manning), John (Charlotta Petterson), Michael (Isadora Prizeman) and their families.

Share Your Memory of
Gisele
Upload Your Memory View All Memories
Be the first to upload a memory!
Share A Memory