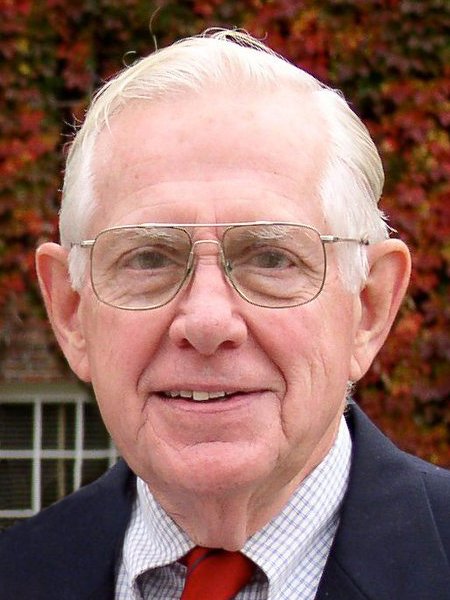 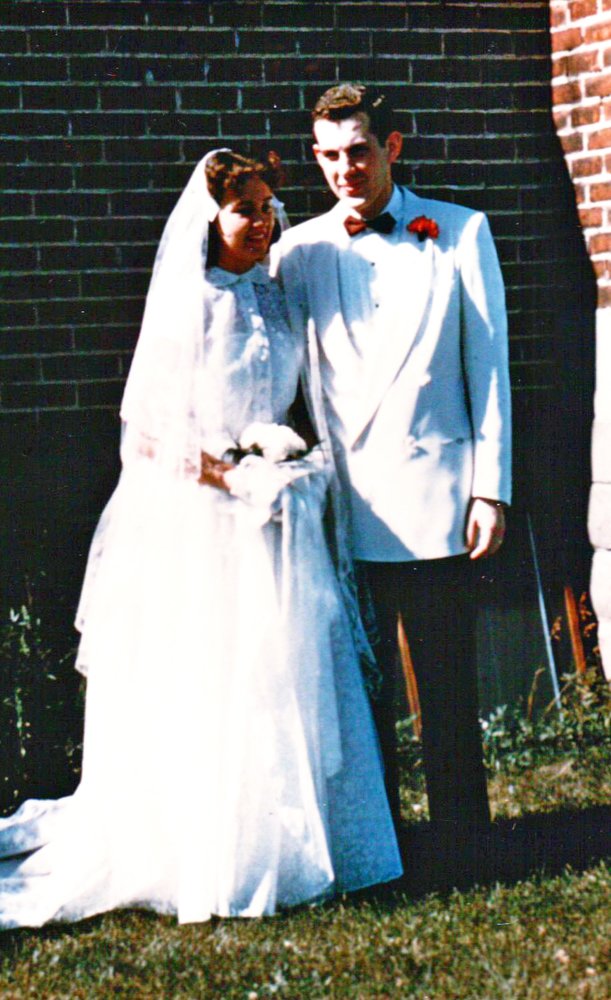 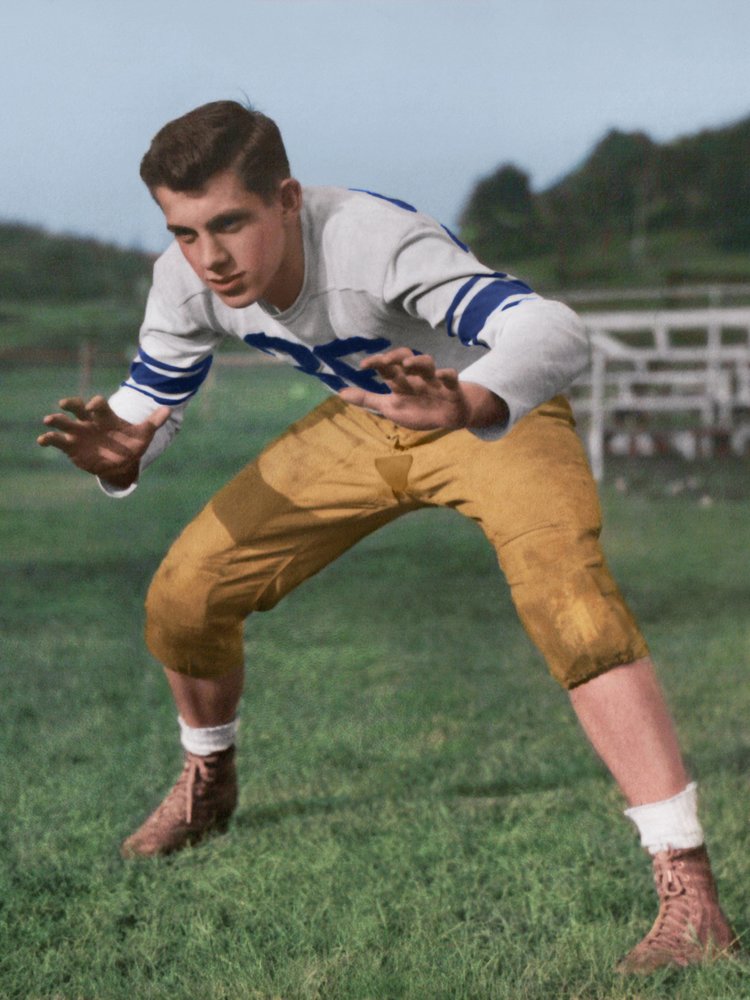 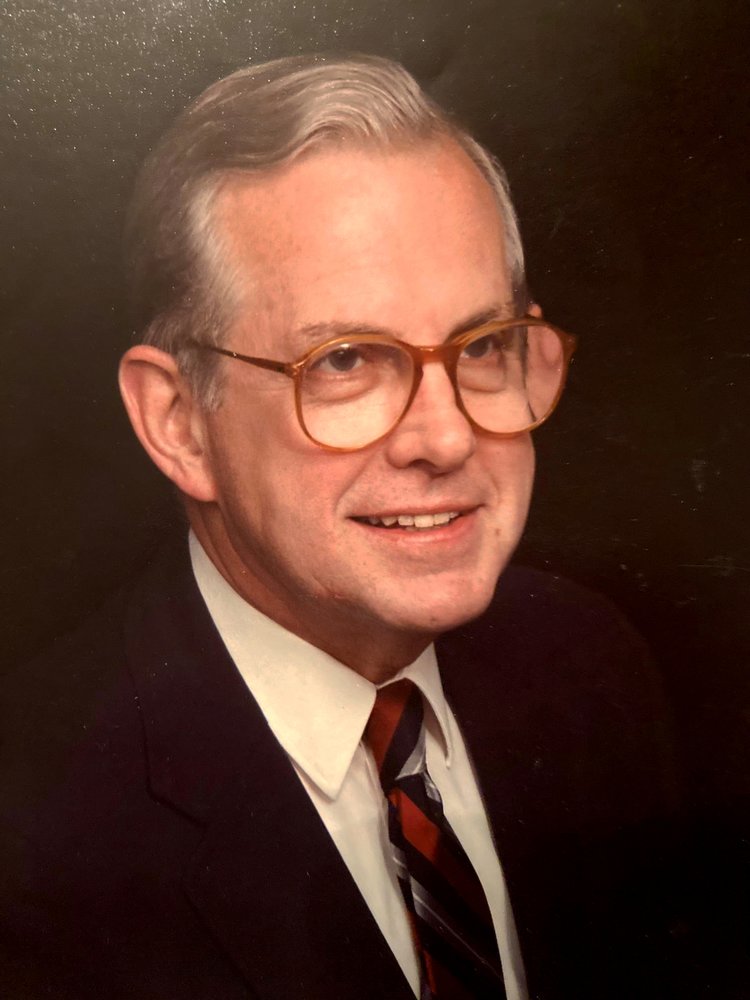 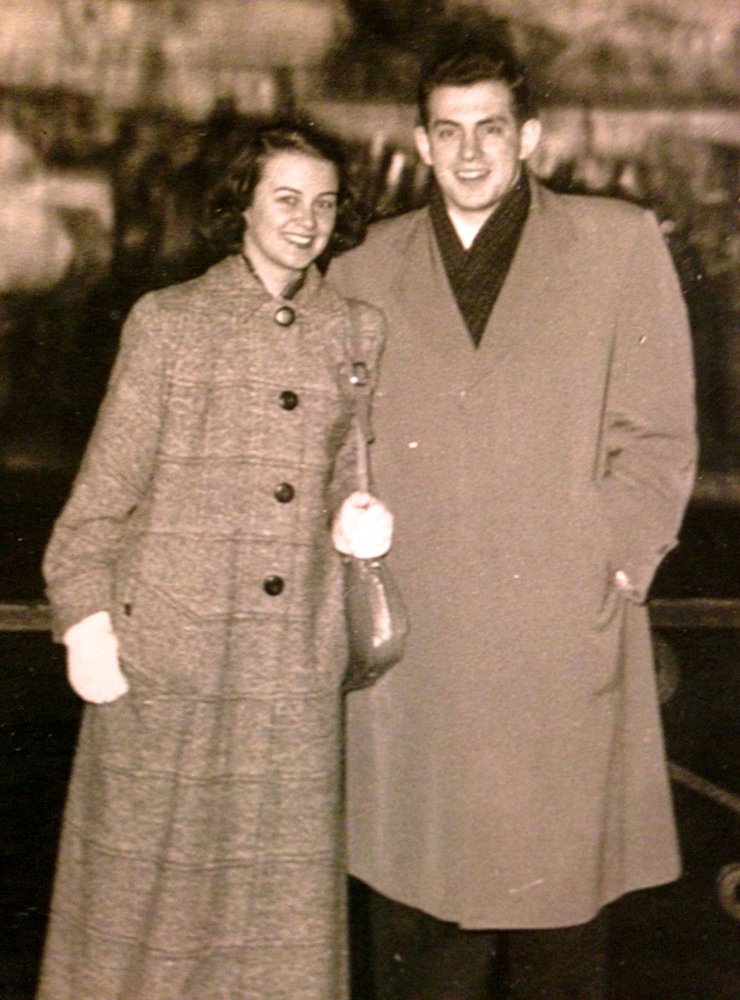 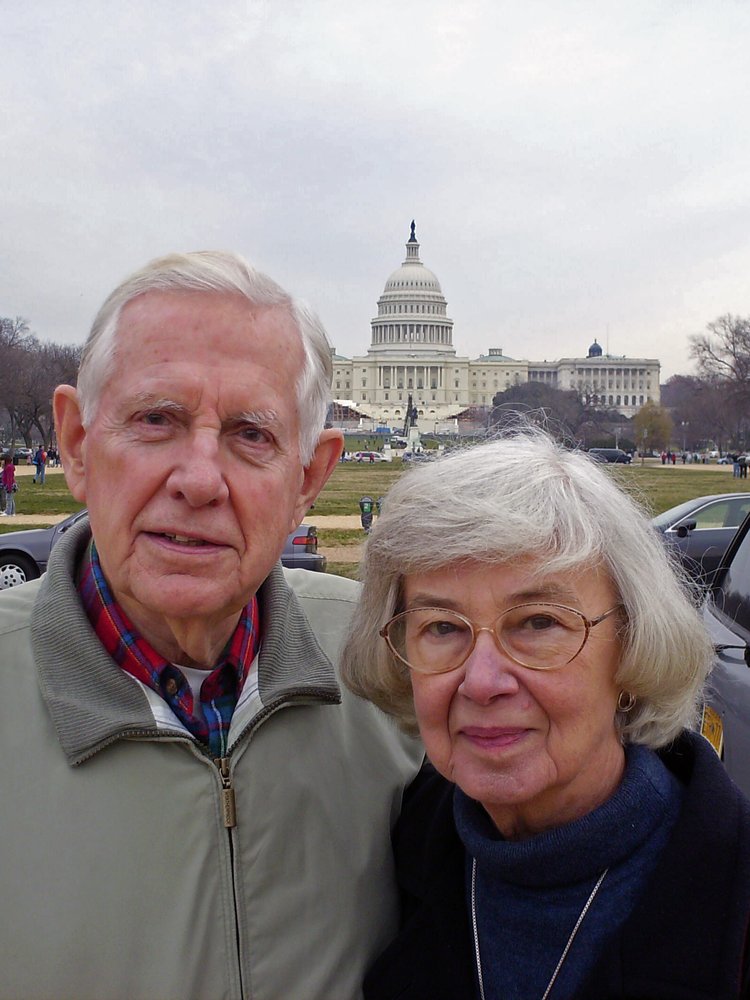 William T. (Bill) Dentzer, Jr., whose life of abiding Christian faith and love, service, integrity, and humility inspired his family, friends, and many others, died of non-Covid pneumonia on Monday, Jan. 25, at Greenwich (Conn.) Hospital. His immediate family were with him at his bedside, or connected by video over the internet, when he died. He was 91.

A resident of Larchmont, N.Y., for nearly half a century, Bill lived since 2015 with his wife, Celia, in independent living at the Osborn retirement community in Rye, N.Y. Before retiring in 1994, he was by turns a nationally-elected student government leader; a force in the creation of the U.S. foreign aid program in the 1960s; an ambassador-ranked diplomat; the New York State banking superintendent; and the founding chairman and chief executive of the Depository Trust Company (now the Depository Trust and Clearing Corp.), the entity created to address the paperwork crisis that paralyzed Wall Street in the 1960s. Today, DTCC settles the vast majority of all securities transactions in the United States, and quadrillions of dollars' worth of those transactions worldwide.

Besides Celia, his wife of 68 years, Bill is survived by his sister, Ann Azer of Scottsdale, Ariz.; son James and his wife, Holly, of Ashburn, Va., and their children, James Jr. and Peter Dentzer; son William T., III, of Reno, Nev.; daughter Susan Dentzer and her husband, Charles Alston, of Chevy Chase, Md., and their children, William, Samuel, and Grace Alston; daughter Emily Dentzer and her husband, Scott Rodi, MD of Lyme, N.H., and their daughters Caroline, Eliza, and Alice Rodi; and a nephew, James Wilson, of Scottsdale, Ariz.

Bill's long and eventful life began in Rochester, Penn., on Aug. 29, 1929, born to William T. Sr. and Gertrude Campbell Dentzer. His father and grandfather both worked for the local newspaper as an advertising salesman and reporter, respectively. Bill was reared in Rochester, attended public schools there, and graduated from Muskingum College (now University) in New Concord, Ohio, in 1951 with a degree in political science and minors in economics and speech. He was an award-winning debater, college football tackle, perennial class president

(a campaign slogan read "Don't Be Dense, Vote for Dentzer"), and all-around "Big Man on Campus."

In his junior year of college, he successfully schemed to meet a sophomore from Indiana, Celia Hill, taking her to see the movie "All the King's Men" on their first date in 1950 - an event whose anniversary they dutifully observed every March for 70 years. They were married by her father, a Congregationalist (now United Church of Christ) minister, in Indiana in June 1952.

Following his college graduation, Bill served a year as president of the National Student Association, the confederation of more than 300 U.S. college and university student governments that operated from 1947 to 1978. As he wrote in an autobiographical sketch for Muskingum in 2018, the organization "stood for responsible student engagement on campus, opposition to racial discrimination and McCarthyism, expressing student views on national issues affecting higher education, and advancing international efforts to support student freedom and welfare in other countries" (see The Greatest Father from a Great Generation). Following his term as president, Bill and Celia moved to The Netherlands, where Bill led the establishment of the secretariat for a new International Student Conference, which sought to promote democratic alternatives to Communism among student organizations worldwide.

The couple returned stateside in 1953 and Bill entered law school, first at Yale and subsequently at the University of Pennsylvania, before eventually concluding he did not wish to practice law. Drafted into the Army in 1955, he underwent basic training but was then seconded to the Central Intelligence Agency in Washington, D.C. (Later, he joked sardonically that he calculated his success at the agency on the basis of how many bad ideas he had helped to kill on any given day.)

When John F. Kennedy was elected President in 1960, Bill arranged to be transferred to the newly-created U.S. Agency for International Development (USAID), America's program of foreign assistance to underdeveloped nations. He held several posts there, including as special assistant to the director of the Alliance for Progress, the subset of the foreign aid program created by Kennedy to foster economic development in Latin America. In 1965, he was appointed director of the USAID mission to Peru - the youngest person named to lead an AID mission at the time - and he and family moved to spend several exciting years in that nation's capital, Lima.

The family returned to the U.S. in 1968 when Bill was named Deputy Ambassador to the Organization of American States, the entity created in 1948 to foster solidarity and cooperation among member states in the Western Hemisphere. In 1969, he was named to head the New York State Council of Economic Advisors, and in 1970, was appointed New York's Superintendent of Banks by Gov. Nelson Rockefeller, at a time when many of the nation's largest banks held state rather than national charters and were thus subject to state regulation.

While serving in that role, he helped to engineer a change in state law that allowed banks to finance loans for the purchase of cooperative apartments, which proved to be a substantial boon for moderate income homebuyers. He also worked to eliminate anti-usury legislation that made obtaining a mortgage loan virtually impossible in periods of high interest rates, and implemented policies to open competition among banks statewide, to the benefit of consumers.

When he took on the assignment of creating the entity that would become DTC in 1972, Wall Street was still reeling from a paperwork crisis that had caused securities transactions valued at hundreds of millions of dollars to be delayed or fail completely. At the time, trades of stocks and bonds involved the movement of actual paper certificates; for example, when stocks were sold, the paper stock certificates had to be received from sellers, sent to transfer agents for cancellation, and then new stock certificates were issued in the names of the new buyers as proof of their legal ownership. As the volume of stock market trading soared, these transfer agents were swamped, "causing long delays in the provision of new certificates to brokers for their clients," Bill wrote in his 2008 book, The Depository Trust Company. A number of brokerage firms went broke as a result. "The agents, typically banks, blamed brokers for the chaos and the brokers blamed the banks. Both were partly right," Bill wrote.

The solution came in the form of efforts to "immobilize" paper certificates, automate the system, and create electronic book-entry processes to record the clearance and settlement of securities trades. DTC forged new communications links with banks, brokerage firms, and clearing agencies across the country, and substantially lowered the cost and improved the accuracy of the clearing and settlement process and achieved a new standard of fail-safe performance.

Bill took great pride in creating a highly ethical organization at DTC, and a company culture that was "professional, cost conscious, risk conscious, objective, transparent, and responsive to its Participants but impartial" among them, as he later wrote. In fact, whatever the cause or concern, Bill strived consistently to live a life of public service and to advance the greater good.

In 1982, New York Governor Hugh Carey appointed him to lead an ad hoc committee that recommended long overdue raises for judges across New York State. Later, he led a municipal panel in Larchmont that defused a simmering religious dispute in the community over the display of a Nativity scene on village property. He subsequently led another local panel that attempted to streamline overlapping municipal government structures in Larchmont and Mamaroneck. He chaired the board of directors of Larchmont's public library, and was actively involved in multiple governance roles at the Larchmont Avenue (Presbyterian) Church, which the family joined upon moving to Larchmont in 1969.

Bill and Celia were devoted to their alma mater, Muskingum. Bill joined its Board of Trustees in 1982 and took over as chair of the board's Finance and Management Committee in 1988. He served in that capacity for 26 years, and through four Muskingum presidential administrations, until he retired from the Board and became an emeritus trustee in 2015.

In 2012, both Bill and Celia received honorary degrees from Muskingum, and in 2013 Bill was named one of the outstanding graduates of private colleges and universities in Ohio. Over the years, he grew close to a number of fellow Muskingum alumni, including the late Sen. John Glenn and his late wife, Annie, and served as the New York finance chairman for Glenn's 1984 presidential bid.

At the core of Bill's life was his faith and his family. Living and acting according to the teachings of Jesus Christ was the central principle of his life. He told his children that the people he most admired were the people who acted most like Jesus, seeing the essential personhood and dignity in every human being. To the end of his life, he read deeply into theology and sought out intellectually rigorous appraisals of faith that focused on meaning more than miracles.

Weeks before his death, he sent each of his children copies of the book Eternal Life: A New Vision, written by the retired Episcopal bishop of Newark, John Shelby Spong. In the book, Spong wrote that we as humans are "the creations of those who have loved us," which is how we are introduced to God:

In the process of having our lives created by the love of others, we have become part of their lives and they have become a part of ours. We cannot separate ourselves from them, since the very being of all human life has been joined and intertwined. So if any of us is to share in that which we called the eternity of God, these lives that are so deeply a part of who we are must also share in that eternity with us….I prepare for death by living.

Bill and Celia deeply loved their five children, their spouses, and grandchildren. They rejoiced when the clan and their pets visited at holidays and during the summer, to swim, shoot pool, play, and laugh at what they dubbed "Camp Larchmont." They lived through the loss of beloved daughter Ardith to lung cancer in 2010, and survived Celia's near death from a ruptured aortic aneurysm in 2015. These and other debilities of older age hastened their departure from the 1897 Victorian home on Woodbine Avenue in Larchmont where they had lived for 46 years. With the move to the Osborn in 2015, and Celia's advancing dementia, their lives became more cloistered but no less happy - staying in touch with old friends by email and phone, and staying up late at night to watch what seemed like the entire catalog of Turner Classic Movies.

Bill maintained a keen interest in current events, and a commitment to Democratic politics, to the end of his life. Amid the pandemic, he relished weekly Zoom conferences with family, which were often dominated by conversations about politics and theology amid updates on family doings. In Bill's final week, he experienced two triumphs: First, obtaining the COVID vaccine on Tuesday, and then on Wednesday, Inauguration Day, witnessing the peaceful transfer of power that is the hallmark of American democracy. "This is a great day! This is a wonderful day!" he wrote to his family, and cheered out loud to anyone else he spoke to that day.

His sudden sharp decline beginning the next day came as a rude shock to his family, who reel at his loss, but thank the Lord that he survived to see his country embark on a higher road.

In lieu of flowers, Bill's family suggests contributions in his memory to Muskingum University, the Larchmont Avenue Church, or a charity of your choice.

A virtual memorial service will be streamed online on Monday, Feb. 15 at 11 a.m. ET. Please click here or visit http://bit.ly/wtd-service for more information, including how to view and participate in the service.

• Click here for additional photos of Bill and his family •