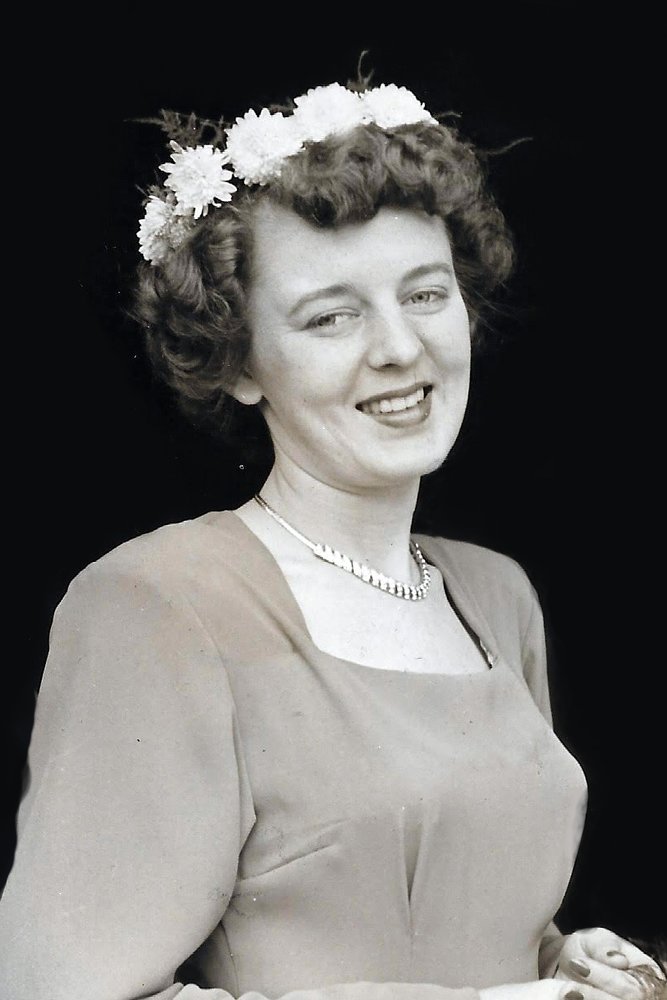 Catherine, known affectionately as "Katy" by friends and family, passed away peacefully on November 27, 2019.

Katy was born on April 13, 1927 to John and Catherine Simonaitis in Chicago, Illinois. Her father was a physician and her mother was a homemaker. Katy, the eldest of five children, was a first generation American from a proudly Lithuanian family and spoke only Lithuanian until the age of five. She grew up on the South Side of Chicago, a fact she enjoyed sharing throughout her life.

She graduated with a Bachelor of Arts degree from St. Mary of the Woods College in Terre Haute, Indiana, and received her Master of Arts degree from The Catholic University of America, in Washington, DC. There, she met Robert Crean, known as Bob, who would become her husband. They married in 1951 and eventually settled in Larchmont, New York where Katy would spend the rest of her life.

Katy devoted herself to raising her nine children, including caring for her middle child, Conall, diagnosed with autism long before the term was commonly known. She adored her husband, whose creativity and charisma were a continual inspiration and source of fun for her during their marriage.

Katy used her writing skills to help support the family by taking her passion for interpreting dreams and started a syndicated column for the New York Daily News entitled "Your Dreams, by Katy." In later years she would become a beloved icon at the Hallen School in New Rochelle, New York where she worked for nearly 40 years, retiring at the age of 88.

Katy raised her large family with humor, grit and fortitude. Her biggest joy in life was, without question, spending time with her loving children, sons-in-law and daughter-in-law, and her ten grandchildren.  Known for her quick wit and tart tongue, her many down-to-earth maxims and aphorisms, Katy saw many significant ups and downs in her life, but as a devout Catholic and daily communicant she met each day with unabashed faith, optimism and determination.

Katy also had many hobbies and “favorite things.” She was an expert needlepoint artist and her grandchildren treasure their enormous Christmas needlepoint stockings lovingly crafted by Grandma. She was renowned for her passion for crossword puzzles and acrostics, which she successfully conquered with an ink pen. She also taught her grandchildren the joys of such simple things as angel hair pasta with an entire stick of butter and the fun of a joy ride around all Larchmonters' favorite crown jewel, the Larchmont Manor.

In addition to her husband, Katy was predeceased by three of her children, Ellen, Peter and Elizabeth.  She will be dearly missed by her six surviving children, Catherine (Howard Pincus), Amy Corn (Richard), Maris Vidler (Don), Conall, Christopher (Eileen) and Emily Sullivan (James). She will also be sadly missed by her beloved grandchildren Lizzy, Meg, Joanna (Ryan Waffle), Laura, Robert, Katie, Andrew, Lilly, Michael, and Christopher. She is also survived by her sisters, Leonarda Simonaitis, Anne Cappuzzello, and by her brothers and sister-in-law, John Simonaitis (Grace), and Joseph Simonaitis, and many nieces and nephews.

Katy was the embodiment of the power of sheer will, inner strength and faith. Her continuous interest in every member of her family and their lives was unflagging and enthusiastic. She never forgot any fact or story about any of one of her family (or their friends). She was the hero of the family.

Relatives and friends are invited for visiting hours on Friday, December 6, from 4:00 through 8:00 p.m. at the Fox Funeral Home, 2080 Boston Post Road, Larchmont, New York. A Funeral Mass will be offered on Saturday December 7 at 9:45 a.m., at St. Augustine's Church, Larchmont, New York with interment to follow at Gate of Heaven Cemetery, Hawthorne, New York.

In lieu of flowers, the family asks that donations go to the Community Support Network at Westchester Institute for Human Development (WIHD) in memory of Catherine M. Crean.  On the website at https://www.wihd.org/donation-page/ select under “designation” Community Support Network.  WIHD provides medical care and other critical services to people with special needs such as Katy’s son, Conall.

Share Your Memory of
Catherine
Upload Your Memory View All Memories
Be the first to upload a memory!