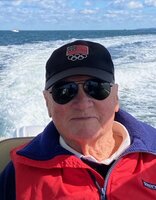 John Martin O’Gorman died December 19, 2022 with his beloved wife of almost 60 years, Judith O’Neill O’Gorman by his side. He was born August 2, 1933, the son of Thomas and Florence O’Gorman. He is survived by his wife, and his three adored children: Jennifer (Morgan) Kennedy, Carolyn (Jim) Norris and Christopher (Lisa) O’Gorman, and by his eight loving grandchildren: Morgan Kennedy, Dennis Kennedy, Noelle Kennedy, Kristin Kennedy, Allison Norris, MacKenzie O’Gorman, Jessica O’Gorman and Jack O’Gorman.

John graduated from Fordham Preparatory School in 1951, and Columbia College in 1955 where he also earned a Masters Degree the following year. He began teaching mathematics at Eastchester High School and taught there for 41 years. People would meet him years later and say how much they learned in his classes - not just about math, but also about how to persevere when the math or life was getting tough.

To John, his family always came first. He enjoyed traveling with them to Africa, Europe, the British Virgin Islands and all across the United States. Never one to shy away from taking a picture, he cataloged every moment of these trips in slide format and developed, watched and labeled every slide. However, his real passion was sailing and spending time on the water. As a member of the Larchmont Yacht Club for 60 years, he could be found every summer on his sailboat, Cortina and then on Aurora - sailing Long Island Sound, or on Lake Wequaquet in Cape Cod. His love of the water was contagious. He enjoyed evaluating the winds, the currents, and the weather, and he enjoyed swimming in the Sound and kayaking great distances long before it became popular. John loved adventures.

When his children were very young, John decided to learn to ski, and to teach his family to ski the same year.  His children remember his patience and care as he made sure that each and every finger was warm and tucked into a glove liner and a glove when they were first learning. He went on to enjoy many years of family ski trips and vacations.

John was also an avid reader with an encyclopedic memory. There was almost no topic he couldn’t discuss with well versed knowledge. His abundance of interests made him a fascinating conversationalist. He was also an accomplished pianist who could honor any request because he could play by ear.

John will be remembered as a born teacher of many skills, and also as a loving husband, father and grandfather.

A funeral Mass will be held on January 7, 2023 at 11a.m. at Saint Augustine Church in Larchmont. In lieu of flowers, donations can be made to St Jude Children’s Research Hospital or Guiding Eyes for the Blind.