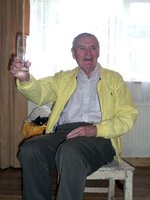 CREEDON—John, J. of Larchmont, NY, died peacefully at home, surrounded by his family, on October 11 at the young age of 96. Creedon was a life-long New Yorker, who loved to sing and dance to “New York, New York,” even from his wheelchair in the past several years. Middle son of Bartholomew Creedon and Emma Glynn and brother of Gerard (d. 1997) and Daniel (d. 2009), he was fiercely proud of his Irish heritage and a deeply committed family man, seeking to give his family nothing but the best. A champion of health and fitness, for most of his life, he completed rigorous daily exercise, often in his hallmark green shorts, enjoining others to “keep moving”! The title of his memoir-in-progress, “Life Was Great (and still is)” encapsules the ethos he embodied for all those who knew him. Former president and chief executive officer of Metropolitan Life Insurance Company (MetLife), Creedon embodied the “American Dream.” He joined Metlife in the mail department in 1942, before serving in the Navy on the USS Caliente (AO-53) for three years during World War II. This short naval service had a lifelong impact in impressing upon him the value of a college education. Upon returning to New York, Creedon rejoined Metlife’s group department and began working towards his college degree, taking night classes at New York University, while also beginning to raise a family with his first wife, Vivian Elser Creedon (m. 1946, d. 1981). After completing his bachelor’s degree, he went on to law school at NYU, and in 1955 became an attorney for Metlife. For over a decade he served as an adjunct law professor at his alma mater, before being named senior vice president and general counsel (1973) for Metlife. Rising through the ranks, he became executive vice president (1976), president (1980), and chief executive officer (1983) of the company and served as president and CEO until his 1989 retirement. He continued on as director (until 1996) and Metlife Advisory Council member (until 2006). Born in a Metlife-owned building in Queens, he liked to think of his long career at Metlife as destiny. Under his leadership in 1985 Snoopy and the Peanuts crew premiered in Metlife’s branding strategy, eventually becoming nearly synonymous with the company. Creedon oversaw the launch of the Metlife blimp program in 1987, with “Snoopy 1,” “Snoopy 2,” and “Snoopy 3” gracing skies across the U.S. for thirty years. His commitment to wellness inspired the Metlife “Wonders of Life” pavilion at Epcot Center, Disney World. In addition to serving on numerous Boards of Directors, he was president of the American Bar Foundation (1980-82) and became a life trustee of both the NYU Board of Trustees and the NYU Law School of Law Foundation Board of Trustees. His 1985 appointment to Mayor Koch’s Task Force on Water Conservation famously seemed to expedite the end of a drought. During the Reagan administration, he was a member of the Presidential Commission on Executive, Judicial and Legislative Salaries and served on the President's Commission on the HIV epidemic. He was also especially proud of being made an honorary Girl Scout and having an outdoor education center named after him. A believer in hard work, routine, and the power of positive thinking, he went to his office in the Metlife building above Grand Central Station well into his 90s. His disposition, generosity, infectious smile and ever-readiness to sing made “Mr. Excellente” the life of most every party, and no day was ever complete without chocolate ice cream and an emphatic “accentuate the positive!” Although he never let any of his kids or grandkids beat him at any game, he was their steadfast champion and safe port in every storm. He is survived by his wife, Diane (m. 1983), children, Juliette (John Kvernland), Michele (Kevin Fox), John, Jr. (Joanne), David (Debbie), Geneviève (Shannon Winston), Jean-Philippe (Amanda), and grandchildren, Kristin (Ricardo), Ingrid (Adam), Amanda (Nick), Alexandra (Matthew), Scott (Tish), Andrew (Mariam), Corey, Vivian, Bridget (Allioune), Zara, and Emma, as well as great-grandchildren, Eleanor, Juniper, Mady, and Naia. In lieu of flowers, the family is requesting that donations be made to the John J. Creedon Scholarship fund at NYU Law School or Save the Sound. A celebration of his life will be held at a later date. Funeral services are private.