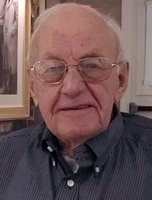 FRANK ROBERT ADAMO OBITUARY January 6, 1928 – October 3, 2020 Frank R Adamo of Larchmont, NY passed away at the age of 92 on October 3, 2020. Frank was born on January 6, 1928 in The Bronx, NY to the late John and Elizabeth (Bessie, nee Walsh). He is preceded in death by his wife, Frances (Granny Franny), two brothers, John Adamo and Philip Cocozza, a sister, Lillian Varsames, as well as neice Laina Gervasi-Schweitzer. Frank is survived by his loving daughter, Elizabeth Raucci and her husband, Richard, grandson Keith Auletta and his wife Trinidad, great-grandchildren Aidan, Ava and Christopher, granddaughter Jaime Panissidi and her husband Anthony and sister, Marie Gervasi. Also survived by nieces Marion Kelly, Susan Varsames, and Nancy Ann Rankin, nephews John Adamo, Jr, John Varsames and Philip Gervasi, their respective spouses, children and grandchildren. Growing up in The Bronx, Frank attended PS 83 and then, as he always said, he “went in the front door and out the back” of Samuel Gompers High School. He served in the National Guard at Camp Smith, NY and was a proud “Diamond” member of the International Union of Operating Engineers Local 15-15A, since 1952. Frank was a Fourth Degree member of the Knights of Columbus and a Charter member of St. Frances De Chantal Council. Frank was also the unofficial “Mayor” of the Pryor Manor Homeowners Association in Larchmont, NY, a community he cherished and was very involved with. Of his many years as an operating engineer, his mastery of the bulldozer was legendary but his proudest achievement was being the “first bulldozer in and the last one out” of Freedomland, the “Disneyland of the East” located in The Bronx, NY. Beginning with operating the heavy equipment during the initial phase, Frank continued on as equipment superintendent during construction and wound up as General Park Superintendent during Freedomland’s years of operation. He was also in charge of dismantling the park and later on, running the massive landfill project at the former site which later became Co-Op City. He worked at this site for 17 years! Frank is the co-author of the book: Images of America: Freedomland , Arcadia Publishing. He was also instrumental in arranging for a plaque to be placed at the former site of the park’s entrance on Bartow Avenue commemorating the 5th Anniversary of the park’s opening, held in 2013. Hopefully, this initial step will lead to a permanent museum commemorating Freedomland that will feature many items from Frank’s vast collection of photographs and memorabilia. His position afforded him many unique opportunities, one of which was getting to meet many of the old and new stars that appeared in the Moon Bowl at Freedomland. He took great joy in getting autographs and posing for photos with the likes of Duke Ellington, Tony Bennett, Sarah Vaughn, Count Basie, Lionel Hampton, Andy Williams and Pat Boone, as well as Paul Anka, Bobby Darin, Brian Hyland, Jackie Wilson and The Three Stooges! He fastidiously kept a list of all those he met during his tenure at Freedomland. Ever the jokester, Frank showed up at his sister’s wedding as a member of the bridal party, but dressed in the Digger O’Toole costume. Unfortunately, Digger was the park’s wild west undertaker from the 1800’s!!! After his stint in the Bronx, Frank moved on to be the Park Superintendent at Westchester County’s art-deco amusement icon; Playland. Frank started his career as an airline mechanic for Pan Am but followed in his grandfather, father and uncle’s footsteps operating heavy equipment. His years with Naclerio Contracting and DeDona Contracting were quite productive and he either made friends or ruffled feathers due to his strong personality. Everyone has a Frank story - he was a character and a raconteur when it came to telling stories of his own. Family and friends loved picking his brain for anecdotes or advice. He always had an answer for everything and it was 99 out of 100% the right one. The last 30 years of his career were spent as project manager for Development Strategies, a construction company. Yes, He worked until he was 90!! 7/24/365!! Ever the optimist, Frank just renewed his driver’s license in January! Frank loved bear and deer hunting with his childhood friends, football, fishing, gardening, watching the Triple Crown and the Yankees, especial the GOAT’s Mantle and DiMaggio. He cherished the Babe Ruth autograph that he got as a young boy when he met the “Sultan of Swat” at a movie theater opening in the Bronx. He carried that signature until his dying day, encased in plastic! Despite a gruff exterior, Frank was a fierce protector of family and friends and he would do anything, for anybody, anytime. Anyone who knew Frank knew that he was full of pride and love for his family but suffered no fools. If he disagreed with you, you knew it! He was of the generation that was not concerned with political correctness! No one can adequately express the tremendous sorrow and grief we feel for the loss of our beloved patriarch. Family would like to thank the staff at Maplewood at Darien for caring for Frank during his last three months at a time when they became substitute family due to Covid restrictions. Their care and concern for him was above par and very much appreciated. Arrangements are being handled by John J. Fox Funeral Home, Larchmont, NY. A celebration of life and internment in the family plot in St. Raymond’s Cemetery, Bronx, NY will be held at a future date.