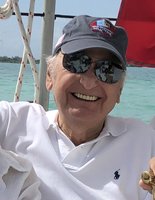 Leonard Lichter died at peace and with dignity on September 14, 2020, at the age of 92. He was loved dearly and revered by everyone who knew him. His positive attitude, sometimes inappropriate jokes, and willingness to always help others will forever be remembered. After his discharge from the United States Air Force as First Lieutenant, Leonard resided in Westchester County and practiced in New York City as a CPA for more than 20 years and then as an Attorney for the past 45. He was highly regarded in the New York business community and became life-long friends with many of his clients and co-workers. Deeply devoted to family and friends, Leonard is pre-deceased by his wife of 49 years, Lois. He is survived by his two children Jonathan (Laura) Lichter and Shari (Michael) Philipps, his five grandchildren, Aaron (Bing), Harrison, Paige, Emma and Laine, his great-grandson George, and his loving partner of eight years, Rita Fishman. Leonard will be greatly missed. Contributions in Leonard’s memory can be made to NCJW-NY and Stop the Traffik.