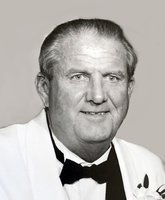 VISITATION: is THURSDAY 4:00 PM until 8:00 PM at John J. Fox Funeral Home in Larchmont Only 36 people are permitted in the funeral home at any time. Social distancing is required at all times. Masks must be worn at all times. FUNERAL MASS: is SATURDAY 10:00 AM at St. Augustine Church in Larchmont Only 75 are permitted in St. Augustine Church at any time. Social distancing is required at all times. Masks must be worn at all times. Edward Donlon Flynn passed away in the early morning of June 9, 2020 at the age of 81. Edward was born in New York, N.Y. on September 26, 1938, to John (Jack) and Ethel (Donlon) Flynn. As a young child, Ed’s family settled in New Rochelle, N.Y. where he attended Blessed Sacrament Grammar School and New Rochelle High School. Ed called New Rochelle his home for most of his life, leaving to serve in the U.S. Army in Germany during the Berlin Crisis and to complete his schooling at Paul Smith College in Saranac, N.Y. Fondly known as Tiger to all of old New Rochelle, he entertained his children and grandchildren with stories from his youth. Ed’s path in life was laid when he met Kathleen Higgins of Brooklyn, N.Y. They married on July 19, 1969 with Ed spending the next 50 years making Kathy laugh. Together they raised three children, shared in their Catholic faith and enjoyed an active social life with their dear friends. After a long and distinguished career on Wall Street, Ed enjoyed spending his later years reading, quickly completing the daily crossword puzzles and wintering with Kathy on Hutchinson Island, Florida. An avid sports fan, Ed saw little difference between a N.Y. Yankee play-off game and standing sideline at one of his children’s and grandchildren’s sporting events. His enthusiastic cheering and coaching, either from the sidelines or his sofa, were legendary. He loved the N.Y. Yankees, Rangers, and of course Notre Dame football. “Why would anyone get married on a Saturday in the fall when there is a Notre Dame football game on?”, Ed asked more than once. Summer found Ed relaxing at The Larchmont Shore Club, enjoying the beach during the day and the terrace with friends in the evenings. His legendary sense of style, from brightly colored Bermudas to madras plaid and popped collars, was known around town, as was his sense of humor and limitless knowledge of obscure trivia. Tiger was a family man, a loving husband, a loyal friend, and a devoted father and grandfather, whose dedication to his Irish heritage and Catholic faith were evident to all who had the good fortune of knowing him. Ed is survived by his wife Kathy; their three children, Kristen (Edward), Meghan (Martin) and Sean (Francine), his grandchildren; Dennis, Jack, Colleen, Mae, J.J., Brian, Peter and Grace, and his brothers; John (Jack), Anthony (Tony) and Gareth (Gary) Flynn. We will miss him terribly.