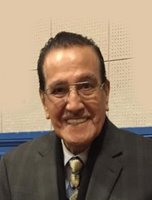 Jorge Joel Diaz-Oblitas was born April 19, 1939 in the city of Celendin, which is a province of Cajamarca Peru. On March 2, at 7:43 PM he gave his last breath. He lived to be 80 years old. He married Doris Rebecca Castillo Guarniz in the city of Miraflores lima Peru, April 18, 1968. Together With this beautiful and amazing woman, God blessed them with four beautiful children. Iris, Eric, Arturo and Josue, and nine grandchildren. He involved himself in the military life at a young age, pursuing a professional career with the police force in Peru for four consecutive years. God had other plans for him. Jorge gave his life to God in baptism in 1962. He was called by the Seventh day Adventist to become a missionary and spread the word of God. By selling Adventist books he helped pay for us Education at the Adventist University in Lima Peru. He graduated with a bachelor degree in Business Administration and Sales. He continued this type of work by being the Sales Manager and Production Director for the produce department of the Adventist University UPeU of Peru Union from (1970 through 1981) Also was in charge of public relations for the Adventist Peruvian union (1981-1992). In 1993 he immigrated to North America and lived in New York. He continued presenting his Missionary services in the Seventh-day Adventist Church of New Rochelle, Now known as the Central Mount Vernon SDA church through the year 2008. Once retired he joined the Police department in Mamaroneck NY as a Crossing Guard where he served another 11 years to community. Jorge was very appreciated, respected and loved by His family, friends, his co-workers and Neighbors also anyone else he knew. He was best known by his characteristic of sharing the testimony of Jesus Christ. One of the many people that his testimony touched was Coronel Alfonso Ramiro Rojas who also Dedicated his life to God. He dedicated his life to the service of God as a church elder, Treasurer, mission director and a Stewardship director. He also sang in the church quartet and the Church choir. He formed small groups and subsidiaries as well. Above all he used his talent using his Harmonica to worship God. His favorite Bible text was Psalms 23 and his favorite Hymn was number 411 ”Under his wings” His greatest Desire was the Spiritual union of his family members and friends and to see The Glorious day of his Redeemer’s coming. Rest in peace our dearest Jorge, Hermano Jorge, Papi Jorge, Tío Jorge, or however you would have called him. We all still referred to a great man, a great father a great Husband, brother, friend and overall a great son to God our Savior.