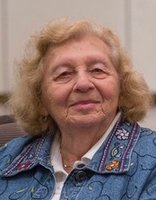 Naomi Sacks, a long-time resident of Larchmont/Mamaroneck, passed away on Monday, February 3, 2020 at her home at The Osborn in Rye, New York at the age of 94. Born on November 4, 1925 to Jacob and Betty (Rubin) Gostin, she was a Bronx girl at heart. She studied at The Art Students League and attended New York University, from which she graduated. In 1947, she married David Sacks. They moved to Larchmont in 1955, where they raised their four children; Jonathan (Evelyn Louie), Deborah (Stephen Chapin), Judith (Steven Bliss) and Joshua (Sharon Davis). While the marriage ended in divorce, Naomi remained in Mamaroneck. A talented artist, she continued to appreciate art throughout her life and to paint until she was well past ninety. An early supporter of Planned Parenthood, she organized the first local house tour to raise money for the organization. She was an active member of Larchmont Temple for many years and served on several committees at UJA. She will be remembered for her love of her family, her sense of humor and quick wit and her appreciation of the beauty of art. Survivors include her four children, ten grandchildren and four great grandchildren. Her burial service was private.