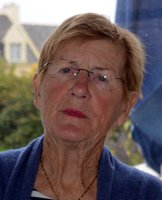 Michèle Marie Steichen, née Queinnec, 87, of Mamaroneck, New York, passed away on January 18th, 2020 at home. Michèle Steichen was born in Landivisiau, France to Gabriel and Anne Queinnec on November 2nd, 1932. She was a Flight Attendant for Air France from 1957-1960, during which time she traveled internationally. After marrying Félicien Steichen in 1961, they emigrated to the United States. She supported him in his endeavors while they raised their three children. During that time, she earned Bachelor’s and Master’s degrees in Art History from SUNY Purchase and Queens College. She enjoyed a 25 year career as a volunteer at the Neuberger Museum of Art, The Cloisters Museum and Gardens, and The Metropolitan Museum of Art. She culminated her career at the Met by being named head of the Foreign Language Volunteers there. Michèle is survived by her children Anne-Aymone (Maurice Arrigoni), François, and Claire (Sean Flynn), and her grandchildren Alice, Adrien, Armelle and Nicolas. She was predeceased by her husband Félicien Steichen. Visitation will be held at John J. Fox Funeral Home, Inc. in Larchmont, on Wednesday, January 22nd from 4:00-8:00pm. Mass of Christian Burial will be celebrated on Thursday, January 23rd, 11:00 AM at St. Augustine Church in Larchmont, NY. Interment is private In lieu of flowers, contributions can be made to the Cloisters Museum and Gardens using this link: https://www.metmuseum.org/join-and-give/donate