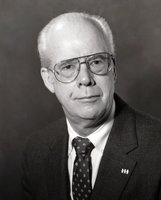 This file presents the tributes given at the memorial service in January at the Larchmont Avenue Church. http://web.csulb.edu/~pamela/GMHTributes.pdf George Miles Homer, Jr., born in Camden, NJ on December 15, 1922 to George and Kitty Homer, passed away peacefully on December 26, 2019 in his home in New Rochelle. George and younger brother, Robert, grew up in Haddon Heights, NJ. After graduating high school, he enrolled at Gettysburg College, but his education was interrupted when he enlisted in the Army. George served in the Army as a Medical Technician Fifth Grade in the 457th Parachute Field Artillery BN from 1943 – 1946, assisting medical officers in care of wounded, receiving multiple decorations and citations. After his military service, he returned to Gettysburg College where he met the love of his life, wife and business partner, Norma DeGhetto. After his undergraduate program, George also attended Columbia Graduate School. George is survived his three children, Pamela of Irvine, CA, Robert (wife Chrystine) of Katonah, NY, and Leslie Homer-Knippenberg (husband Michael) of Holmes, NY, and three grandchildren (Kerri and Jaime Knippenberg, and Brett Homer). He was predeceased by his beloved wife, Norma; parents; brother, Robert; and his first son, also Robert. In 1955, Norma and George settled in Larchmont where they raised their three children, Pamela, Robert, and Leslie. George joined an independent insurance agency in Mount Vernon which he later ran with Norma and then with, Robert and Leslie. The agency, Murray, Schoen & Homer continued to thrive under their management, moving to Bronxville and ultimately to New Rochelle. George was very active with the YMCA in Mount Vernon and later with the White Plains and New Rochelle branches. Believing that giving back was important, George also devoted much time to the Salvation Army, United Way of Westchester, Visiting Nurse Services in Westchester, Boy Scouts, Kiwanis, Rotary Club of Larchmont, and Larchmont Avenue Presbyterian Church. He served as Board President for many of these organizations. His charity efforts were many and in commemoration, he was awarded the YMCA of Central & Westchester Community Service Award and the Mount Vernon Family YMCA Order of Red Triangle Award. George was also the first recipient of the Frederick H. Dayton Award for Outstanding Insurance Agent and Community Involvement, awarded by the Independent Insurance Agents of Westchester County (IIAWC). George was a gentleman’s gentleman, respected by all, and loved by so many. He will be dearly missed. A memorial service will be held at the Larchmont Avenue Church, 60 Forest Park Avenue, Larchmont, NY on Saturday, January 18, 2020 (2pm). For additional information, please contact the Larchmont Avenue Church at www.lacny.org or (914-834-1800. In lieu of flowers, a memorial contribution can be made to United Way of Westchester, Larchmont Avenue Church or Larchmont Rotary.