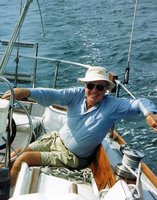 Dick was raised in New Rochelle, NY. He graduated from Holy Cross College and then earned graduate degrees at New York University and Columbia Business School. Dick went on to have a successful career in commercial banking, primarily with the Manufacturers Hanover Trust Co. He was also a Commander in the United States Coast Guard and served for many years on the Board of Directors of Westchester Care at Home, an affiliate of Visiting Nurse Services of Westchester.

Dick was a resident of Larchmont, NY for most of his adult life; he was an active parishioner of St. Augustine’s Church and served two terms as a Trustee of the Village of Larchmont. He had a life-long passion for sailing and was a long-time member of the Larchmont Yacht Club.

Visitation will be at the Fox Funeral Home at 2080 Boston Post Road in Larchmont on Tuesday, October 15 from 6:00-8:00 pm. A Mass of the Christian Burial will be held at St. Augustine’s Church at 18 Cherry Avenue in Larchmont on Wednesday, October 16 at 10:00 am. Interment will be private. In lieu of flowers, donations may be made in Dick’s memory to Westchester Care at Home/VNS of Westchester.